Medical experts come across conditions related to smoking every day with the effects of smoking being well known and documented. In addition to damaging vital organs in the body, smoking has contributes to conditions such as atherosclerosis, varicose veins, and coronary heart disease. It can also impair your cardiovascular system.

Smoking cigarettes is harmful to your veins. It gets in the way of the normal function of blood vessels causing them to become smaller. It increases the risk of blood clots, varicose veins, and other conditions such as stroke and heart attack. The main harmful elements in tobacco smoke are nicotine and carbon monoxide and are known to cause vein problems. Additionally, smoking causes blood clots deep in your leg vein. It is a condition known as deep vein thrombosis or DVT. This condition can be fatal if the clot travels to the lungs and develops into a pulmonary embolism. Though most of these problems are caused mainly by nicotine, the question is how e-cigarettes that have low-nicotine and no-nicotine options affect your vein health.

First, we need to look at what e-cigarettes are. 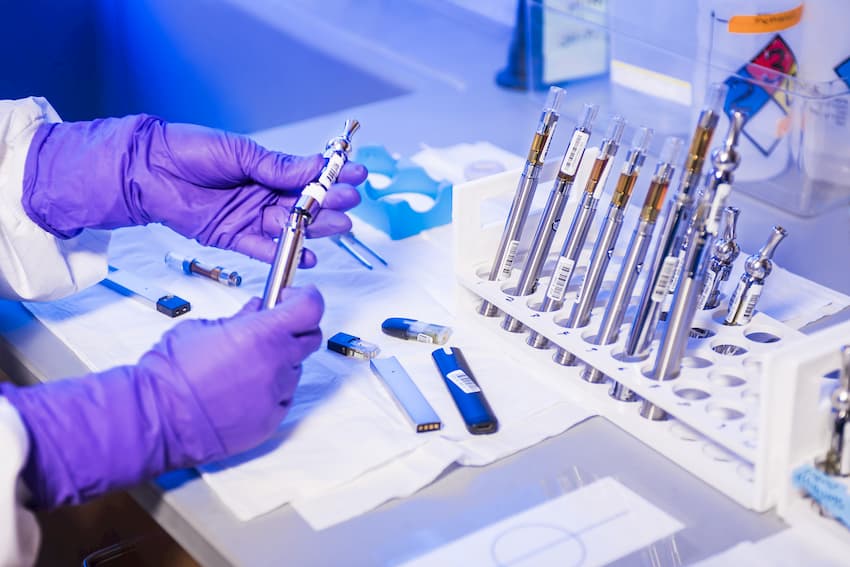 An electronic cigarette (e-cigarette) is a device that is used for vaping or inhaling aerosol. They come in different sizes and shapes. The device may look like a USB drive, pen, pipe, cigar, etc. It is usually made up of a heating unit, battery, or pod for putting the product inhaled (liquids or plant matter), a cartridge, and a mouthpiece. When the battery powers the heating unit, the substance being inhaled is heated gradually into vapour that is breathed into the lungs. Usually, the vaporised solution contains nicotine. The concern on vein health is not with vaping itself, but the substances being inhaled.

The act of inhaling vapour by using an e-cigarette is called vaping. Vaping can be defined as the inhaling and exhaling of vapour (aerosol) produced by an E-cigarette or similar gadget. Also known as smoking E-cigarettes, it has become a common practise, especially in the fast-paced 21st century. The product has been marketed as a safe alternative to conventional tobacco cigarettes and has become a popular way of smoking among adolescents and young adults. Most young people may not realise that this habit causes several adverse effects on your health. It affects the cardiovascular system and the blood vessels.

E-cigarettes has been in the centre of argument since some people sell it as a way to quit smoking. It is marketed as a better alternative to nicotine patches (inconclusive), and no tar is inhaled into the lungs as compared to tobacco cigarettes. However, health professionals see e-cigarettes from a different angle. They have released several reports of the effects of e-cigarettes in constricting blood vessels and causing blood pressure to rise and heart rate to go up.

Can Vaping Cause Varicose Veins?

For more than a decade, vaping has been rising in popularity. Since being promoted as a safer alternative that reduces the urge of smoking, more people are embracing the culture. However, this is far from the truth. The narrative has turned out to be branding hype since the products are made using other toxic chemicals. – Propylene glycol or a vegetable glycerine liquid mixed with nicotine, flavourings, and other synthetic substances.

These ingredients have raised concerns on how safe e-cigarettes are, and whether they pose the same or perhaps even worse threat as tobacco when it comes to vein health. They contribute to the limited functionality of the circulatory system and constrict blood vessels, especially in the legs. Which may lead to varicose veins since the veins cannot function properly by pumping blood back to the heart. Since some E-cigarettes are produced without nicotine, most users may think that the above effects don’t apply to vaping. Various projects have been dedicated to researching the harmful effects of vaping in the body, especially the veins.

Research on the Effects of Vaping on Vein Health

A recent research conducted by professionals at the Perelman School of Medicine at the University of Pennsylvania concluded that vaping or smoking vapour that is free of nicotine can be harmful to your blood vessels.

Researchers conducted the study on 31 healthy non-smoking adult volunteers. They performed MRI exams on them before and after vaping. This study aimed to determine the short-term effects of vaping. Comparing the results from before and after smoking, the researchers concluded that the femoral artery that supplies blood to the leg and thigh had impaired endothelial function. The endothelium lines the blood vessels and essential in facilitating easier blood circulation. When this critical function is altered, blood flow to the brain and heart can be cut off as arteries thicken. This can cause fatal conditions such as stroke and heart attack.

The main problem with E-cigarettes is the vaporisation process, which makes the molecules mostly from glycerol and propylene glycol harmful for consumption. This is despite the e-cigarette liquid being relatively harmless. The research was led by a professor of Radiologic Science and Biophysics at the institution, Felix W. Wehrli Ph.D. He said that apart from nicotine’s obvious harmful effects, the use of e-cigarettes can cause cardiovascular conditions such as varicose veins, which can cause long-term complications.

The use of E-cigarettes is rising among teenagers around the world. It is an easy-to-use device that uses a battery to convert liquid or plant matter into aerosol that is inhaled into the lungs. The substance contains flavours, addictive nicotine and other components. With millions of adults vaping around the world, it has become an easy alternative for smokers who are used to conventional tobacco cigarettes. However, As much as e-cigarettes are marketed as safe alternatives to tobacco cigarettes, vaping is harmful to your health. The dangers of e-cigarettes are profound as more cases are reported every day.

In the study, Researchers used e-cigarettes that contained 0% nicotine but contained glycerol and propylene glycol with tobacco flavouring. They assessed the impact of the e-cigarette after asking participants to take 16 three-second puffs. They then used a cuff on the thigh to constrict the blood vessels and measured the speed of blood after release. The researchers also incorporated the use of a multi-parametric MRI procedure to scan the femoral vein and artery in the leg pre and post vaping. This allowed then to collect results on how the vascular function changed.

After data collection, the researchers conducted a statistical analysis to conclude the differences in vascular functions before and after vaping. The study showed that there was a reduction of the femoral artery’s dilation by 34 percent. Other effects of e-cigarette exposure include;

This report shows that vaping harms the inner lining of blood vessels and cause vein-related conditions such as varicose veins. The research’s lead author and a post-doctoral researcher in the Laboratory for Structural, Physiologic, and Functional Imaging at the University Of Pennsylvania School Of Medicine, Alessandra Caporale, noted that the fact that vaping has an adverse effect on vein health could not be ruled out. She said that most e-cigarette brands and companies market their products as not harmful. This misleads millions of people into thinking they are smoking harmless water vapour. Caporale added that the additives, flavourings, and solvents in the liquid base after vaporisation are significant factors contributing to unhealthy blood vessels and respiratory organs.

Felix W. Wehrli, PhD, said that further research needs to be conducted on the long-term effects of using E-cigarettes. This is because the study was conducted on healthy adults that had never smoked before and had used an e-cigarette only once during the study. Wehrli noted that the effects of vaping maybe profound than assumed. He added that more resources need to be put in discovering other hazardous effects. Earlier in the year, Wehrli’s research group found that vaping causes vascular inflammation.

It would be best if health institutions publicised the effects of vaping more often, especially in schools since teenagers and young adults are the most vulnerable. People need to understand that nicotine might be toxic, but there are other hazardous toxins outside of nicotine. The study showed that there are striking changes in the vein health of participants after using one e-cigarette. The question remains, how much damage can vaping cause after smoking for a more extended period.

So far, it seems that the effects may range widely.

Other known risks associated with e-cigarette smoking include;

Current evidence points out that there are several harmful effects associated with vaping, especially for young people, pregnant women, people who have never smoked before, and addicts trying to quit. This said, it is essential to consult with your doctor, since vaping affects the functionality of your blood vessels significantly.