Typically, the pain subsides when you stop moving. We look at what causes this condition and how is it diagnosed and treated? 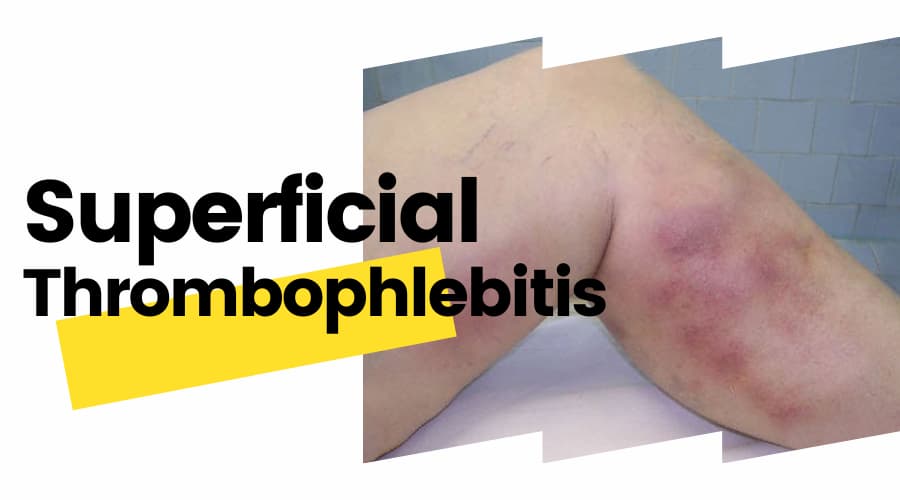 Superficial thrombophlebitis manifests as a painful, warm mass in a superficial vein. The pain may be very intense and worsen upon movement. Any movement might also increase the swelling of the affected area.

Superficial thrombophlebitis is caused when blood clots form in veins due to injury or inflammation. It most commonly affects the lower leg due to its proximity to the large veins in this area of the body.

The most common symptom of superficial thrombophlebitis is pain that worsens with movement or when you stop moving, while warmth typically accompanies it. A person may also experience swelling at the site of the clot due to fluid accumulation around it. Symptoms usually appear on one or both legs.

Superficial thrombophlebitis is usually diagnosed by a physical examination and medical history of the patient. The doctor will feel for areas of tenderness in affected veins, typically accompanied by warmth to touch.

Swelling may also be present around these areas if the blood has moved into surrounding tissues. The lump might be due to injury or inflammation.

The doctor may order imaging studies, such as ultrasound or CT scan, to examine blood clots if the physical examination is inconclusive. You can confirm the presence of a clot through venography.

Venography involves injecting dye into veins through an angiocatheter and taking x-rays of the affected area. This is done after it has been tagged with a radioactive tracer.

Superficial thrombophlebitis is diagnosed primarily through clinical examination and imaging studies, such as ultrasound or CT scan. However, your vascular consultant might order blood tests to look for factors that increase the risk of this condition. Such factors may include hypercoagulability states.

Superficial thrombophlebitis can sometimes be misdiagnosed as cellulitis or another skin infection. This is because the symptoms are very similar between these two conditions.

In some cases, a person may be treated for cellulitis without being tested for the possibility of superficial thrombophlebitis. It is crucial to have medical tests ordered if you develop these symptoms after an injury.

Superficial thrombophlebitis has several risk factors that increase the likelihood someone will develop it. These include:

Treatment options often depend on how severe a person’s symptoms are and whether or not they have any risk factors that increase their chances of complications.

In mild cases, a physician may advise a patient to avoid standing for long periods and get plenty of rest. This also includes avoiding long periods of sitting in one place. Elevating the affected area can help decrease swelling by allowing excess fluid to drain from it back into the bloodstream.

If pregnancy is not an issue for a woman with superficial thrombophlebitis, a doctor may prescribe estrogen-containing birth control pills. These pills help regulate menstrual cycles and prevent blood clots from forming.

Anti-inflammatory medications that are taken by mouth or applied topically may be used to help decrease pain. In addition, these drugs can alleviate inflammation in the affected area. Such medications include ibuprofen (Advil, Motrin), naproxen (Aleve), and aspirin.

Compression stockings may also be recommended to help prevent blood clots from developing. It achieves this by keeping the lower leg in a relatively stable position that prevents fluid from pooling there.

Sometimes, surgery may be necessary to prevent blood clots from developing. This can involve cutting or tying off any affected leg veins that contribute to thrombosis, such as superficial phlebitis. Surgery also decreases your chances of developing deep vein thrombosis and pulmonary embolism by reducing your risk of developing blood clots.

Surgical procedures for superficial thrombophlebitis and deep vein thrombosis include:

Ligation uses sutures, clips, or a small rubber band to cut off the affected vein’s blood flow or tie it closed. The former is known as venous ligation, while the latter is called venous embolization.

Ligation can be performed as an open procedure for larger blood vessels. However, it is typically done using a minimally invasive technique known as radiofrequency catheter ablation through the skin. The affected vein(s) are identified and tied off with sutures or clips applied to them to prevent clots from developing in the future.

Endovenous ablation is a minimally invasive treatment that uses radiofrequency energy to close off blood vessels. This typically involves inserting a catheter into the affected vein(s) through small incisions in the skin. The catheter is then moved back and forth using X-ray guidance until it reaches the targeted vessel. This part of the procedure takes about 20 minutes.

Radiofrequency heat is then applied to the vessel, which fuses its walls and stops blood flow. Endovenous ablation only offers a limited number of treatment sessions per year. This is because an affected vein may have more than one area where thrombosis has developed. Once all clots are removed from the vein, the affected area is covered with surgical mesh and a pressure dressing to reduce swelling.

Scenting is the insertion of a plastic or metal mesh tube called a stent into a blood vessel to prevent blockages from forming. It may be necessary for arteries in the legs with deep vein thrombosis that are causing pulmonary embolisms occurring as a complication. In addition, a stent is useful for veins that have been surgically tied off but are at risk of developing clots again in the future.

A stent is typically inserted via a catheter. It is designed to expand within the vessel and press against the walls. Once it expands, it ensures that blood flow remains unrestricted.

It is crucial to make several lifestyle modifications to prevent blood clots from developing when you have thrombophlebitis. This is especially true if the affected vein(s) has been surgically closed off or treated with endovenous ablation. Such therapies have an increased risk for developing pulmonary embolism when compared to the general population.

If left untreated, superficial thrombophlebitis may become deep vein thrombosis (DVT). It is commonly known as secondary DVT. Symptoms of secondary DVT can include more intense pain, accompanied by swelling and redness of the affected area.

A condition where a person simultaneously has superficial thrombophlebitis, and deep vein thrombosis is known as double or concurrent DVT. The patient is more likely to develop pulmonary embolism than if only one or the other condition is present.

Cellulitis is a complication of untreated superficial thrombophlebitis. This is an infection caused by bacteria that enters the body through open wounds or surgical incisions in or near the affected area.

Signs of cellulitis include swelling, redness, and tenderness surrounding any sores on your leg. The tissue surrounding these sores may feel warm due to excess fluid accumulation under the skin’s surface. If cellulitis occurs, your doctor will likely prescribe antibiotics to help clear up this type of skin infection.

Having cellulitis with superficial thrombophlebitis increases the risk of developing pulmonary embolism. PE occurs when a blood clot from DVT travels to one of your lungs and blocks an artery. This is life-threatening as it restricts oxygen flow into that lung.

While there is no way to prevent clots from forming altogether, you can reduce your risk of developing superficial thrombophlebitis or secondary DVT by maintaining a healthy weight. It includes getting regular exercise.

Quitting smoking is recommended if you have been diagnosed with superficial thrombophlebitis. Smokers are at greater risk of experiencing complications from blood clots than non-smokers.

Although these methods may not completely prevent you from developing secondary deep vein thrombosis, they will help reduce your risk.