Broken blood vessels, also called telangiectasia, are blood capillaries that have enlarged under the surface of the skin, forming red lines that go about in a web-like fashion giving them a web-shaped appearance hence their name spider veins. The thread-like veins appear when blood vessels widen and narrow, suddenly causing irreversible damage that makes them more visible. They are not life-threatening but cause noticeable aesthetic imperfections. Broken blood vessels are commonly found on the face and legs but can typically appear at any part of the body. Spider veins are not known to be harmful nor pose a health issue but can make the person uncomfortable and self-conscious. When found on the legs, spider web may point to venous disease and should be further investigated. Spider veins are treatable, but one needs first to identify the underlying cause and deal with it. 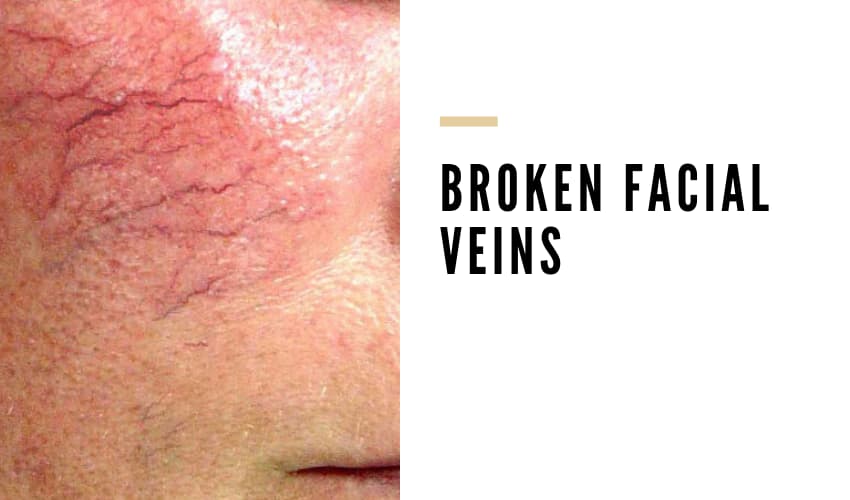 A variety of things can cause the appearance of the broken blood vessels in one’s face or legs, but most of them are lifestyle-related. They include exposure to the sun, excessive and frequent alcohol consumption, changes in the weather, rosacea, pregnancy, and genetic composition, among others. Skin trauma, like squeezing a pimple by applying too much pressure, sneezing, and microdermabrasion, are all likely to cause broken blood vessels. Capillary walls usually are very elastic, but sometimes the vessels can lose their ability to contract if they are dilated continuously; hence they remain enlarged, causing spider webs. The spider webs are common in people with sensitive skin, rosacea, and acne. Susceptibility to spider webs is genetically inherited, and one is likely to have them if their parents had them. Winter season and fluctuation of cold and hot temperatures seem to exacerbate the symptoms of broken blood vessels.

The drastic changes in the weather affect blood circulation leading to flushing of the skin on the face. The sun also damages and enlarges the capillaries drawing them closer to the skin surface. Exposure to the sun for extended periods may lead to sunburn, causing the top layer of skin to peel f exposing blood vessels. During pregnancy, hormonal changes that lead to an increase in estrogen levels can cause broken vessels that typically disappear after giving birth. Irritants from the environment, including chemicals, can damage the skin making blood capillaries more visible. Alcohol is known to cause vasodilation temporarily. Frequent use of alcohol makes the blood vessels dilate for long, causing the redness on the skin surface. Rosacea, a condition characterised by reddening of skin and flushing is also a common cause of broken blood vessels. Injuries also cause spider webs by making blood vessels more visible after the skin has been bruised.

How to Get Rid Of Broken Blood Vessels on Face

Broken blood vessels are very common, especially around the nose, chin, and mid cheeks are diagnosed by visual examination. Some broken blood vessels will resolve on their own when left alone, but others may worsen and become more visible if not addressed. The skin loses its structural integrity, with age becoming prone to broken blood vessels. Different treatment options exist depending on the cause of the spider webs. Not all treatments can work with everyone, and it is necessary to consult a dermatologist before choosing the treatment method. Each of the techniques used has its distinct advantages and limitations. Treatment methods include

A doctor may recommend a retinoid for people with spider veins. Retinoids are creams, lotions, and gels used for different skin conditions to reduce the visibility of blood vessels and boost the health of the person’s skin. Retinoid creams such as tretinoin can increase the collagen quantity in the skin, improving its quality. They help in the keratinization of skin cells as well as their proliferation. Broken blood vessels are more likely to be seen if the skin is pale and dry. Retinoids contain the alcohol form of vitamin A called retinyl that stimulates cell renewal. Cell renewal leads to thickening of the skin, making it less transparent hence the broken blood vessels become invisible. Retinoid creams can also fight inflammation and reinforce weakened blood vessels ridding of the spider webs.

Some topical retinoids cause skin irritations, especially on sensitive skin and those using it for the first time. They can cause redness, blistering, peeling, and swelling of the affected areas. The retinoids can also thin skin first before the user’s skin goes back to normal and eventually thicken. However, the use of retinoids is not recommended for those with rosacea-prone skins as they are likely to react.

In sclerotherapy, injections of sclerosing agents such as polidocanol, tetradecyl sulfate, and hypertonic saline solutions are used on blood vessels to make them disappear. The sclerosing agents seal up blood vessels leading to the disappearance of blood, eliminating telangiectasia. The solutions force the blood vessels to shut completely, and they are reabsorbed into the body. The procedure is suitable for large vessels but does not make a good option for small vessels. It is effective in vessels with a diameter of 0.4mm or greater, but in smaller vessels, it has poor outcomes. The procedure is done in a dermatologist’s office, and results depend on the dermatologist’s abilities and experience. Depending on how deep the damaged vessels are, the dermatologist may include ultrasound in the procedure. Patients report a 40-50% improvement in the involved vein after a single session of sclerotherapy. The treatment course involves 2-3 sessions with a minimum of a month in between the sessions. Since the method does not prevent future incidences of telangiectasia in the affected areas, the procedure is repeated every two years.

Sclerotherapy carries a few risks and complications that may be short or long-lasting. Pain and swelling around the area should be expected. Weals usually form along the blood vessels that were injected in the procedure, and patients also report bruising that lasts for about seven days then disappears. Pain relief medications such as ibuprofen and aspirin should be avoided to prevent the bruising effect. In some rare occurrences, patients have reported deep venous thrombosis ulceration and scarring. Some people also get allergy after the procedure due to the sclerosing solutions, blood clots, and ulceration of the skin. The method is not recommended for those who may be pregnant. It is also essential to check on the type of lotions one uses after the procedure since certain skin lotions are known to irritate the skin following the procedure. The sclerosing solution has its risks that include thrombosis endothelial damage, skin necrosis, and fibrosis. The technique also requires a well-trained dermatologist since injecting the sclerosing agent on the wrong vessel may lead to very unfortunate consequences such as visual impairment.

Laser therapy is one of the best ways to quickly get rid of broken blood vessels effectively and permanently through selective photothermolysis. The technology uses an intense beam of laser lights to destroy damaged blood vessels. Different laser wavelengths are used, and each has a different outcome depending on the type of skin and how deep the broken vessel lies. This type of treatment requires extensive training and can predispose one to skin dyschromia. The laser therapy works by heating the blood inside the veins, causing inflammation and scarring. Blood coagulates inside the blood vessels after exposure to heat from the laser beam making the vein to collapse and seal. According to experts, every colour has its absorption spectrum. The VBeam laser emits 595 nanometers of ultraviolet light that only absorbed by the red colour. This means that the light will only be noticed by the red colour in blood and not the tan or brown parts of the skin. The light energy is then converted to heat energy. The laser beam is focused on the specific area under treatment to avoid damaging the surrounding skin. This treatment takes a period of four to six weeks, making the broken blood vessels to be reabsorbed by the body, and they fade over time.

If a blood vessel is heated super fast, it is likely to explode as opposed to when heated slowly where it shrivels and gradually disappears. This also means that higher heat may require just one treatment session to get the job done but may lead to bruising that may take up to seven days to heal. On the other hand, lower heat does not leave behind any bruises but requires follow-up sessions. The area gets an even-pigmentation and complexion making a face look healthy and youthful. The procedure is not as painful as most people think and only takes a few minutes. One should be careful with laser therapy to avoid damaging the skin, which makes it more sensitive after recovery. People with scarring conditions and those with bleeding disorders are not good candidates for this procedure. The procedure is relatively expensive and may need several sessions to get the job done, and in which case, the veins can still return. Laser therapy is not to be used on people with varicose veins

This is a safe, effective, and cheap technique for treating facial telangiectasis. The procedure is useful for the treatment of superficial and small lesions; hence can be performed by someone with minimal training in an office setting. It involves driving a single fine electrode into the damaged vessel where it delivers heat directly, leading to cauterisation. The technique can cause dehydration and evaporation of fluids in the area damaging the tissue. One needs 3-4 treatment sessions each carried out once per month for the best results.

This is a simple method if treating telangiectasis and does not need extensive training. During the procedure, a small cautery tip is placed at the root of the vessel on the area experiencing telangiectasis. This allows electric current to flow on the vein coagulating blood in the area. The procedure is not recommended for people with pacemakers. Blood-thinning medications such as aspirin, ibuprofen, and warfarin should not be taken several days before the procedure. Depending on the extent of the surgery, the doctor may use either local or general anaesthesia before the surgery. The procedure carries minimal risk, which can include infection in the area, slight bleeding, and pain.

People with broken blood vessels usually try out natural remedies to try to clear out the spider webs before seeking professional help from dermatologists. They work very well when the affected does not have any sensitivity to the ingredients of the natural remedy.

This herb is used by many people to treat skin ailments and vein health. It is available as a supplement and is safe for the treatment of spider webs, especially if one uses preparations made from the bark on their face.

Heat fluctuation is known to cause broken blood vessels. By using warm water to shower instead of hot water, the body temperatures are maintained hence reducing the probability of forming spider webs.

By avoiding inflammation and other causes that cause the reddening of the skin and visible capillaries. The use of moisturisers and sunscreens daily protects the blood vessels against damage from sun and irritations. By avoiding anything that can lead to vasodilation such as heat, caffeine, alcohol, and spices one will have reduced the chances of developing broken blood vessels especially in those who it runs in the family.