Thread veins are very common and affect approximately 70% of women and are usually found on the legs. Additionally, over 89% of people with thread veins have an underlying cause for their condition. They typically signify an underlying vein problem.

What are Thread Veins?

Thread veins are dilated veins that are visible on the skin’s surface as purple, blue, or red clusters of veins or individual veins. They are typically less than a millimetre in width, but their length ranges from very short to long and stringy. Nevertheless, they are actual veins and are connected to other veins deep inside your body. Thus, the vein you see on the surface is only the small superficial part of the main vein.

The cause of thread veins is determined by two factors: Skin type and underlying conditions. When it comes to skin type, thread veins do not discriminate on colour or any particular skin type. A black individual can get thread veins as much as their white counterparts. However, family links which suggest some genetic basis show a certain pattern as some families seem to be more susceptible to thread veins than others.

If someone develops thread veins without an underlying cause, it is most probably genetic, and as such, even successful vein treatment does not assure the development of threads in the future.

It is human nature to justify the cause of any condition. As a result, many reasons offered by women to explain thread veins are not feasible. Wearing tight clothes, crossing your legs as you sit down, or having a hot bath does not cause thread veins.

Nevertheless, severe trauma to the legs has been known to cause thread veins. If during a crush injury such as road accident an individual gets their leg crushed or severely damaged, thread veins might appear.

Thread veins are visible to the naked eye. It is the correct identification of thread veins that may require informed help.

Even though thread veins rarely cause any symptoms, research shows they suggest an underlying problem. As such, you shouldn’t consider thread veins to be merely a cosmetic issue. Instead, they should invoke the patient to seek the services of a vein specialist who will determine if there is a more serious problem or not. It is only after the vein physician has found – or not found – the underlying issue that the thread vein treatment should commence.

Nonetheless, some patients feel aches in their thread veins. Other threads feel tender when touched. This is a giveaway that there are hidden varicose veins (venous reflux) which makes the blood to flow down the vein when you stand causing their walls to stretch, and thus causing the symptoms. 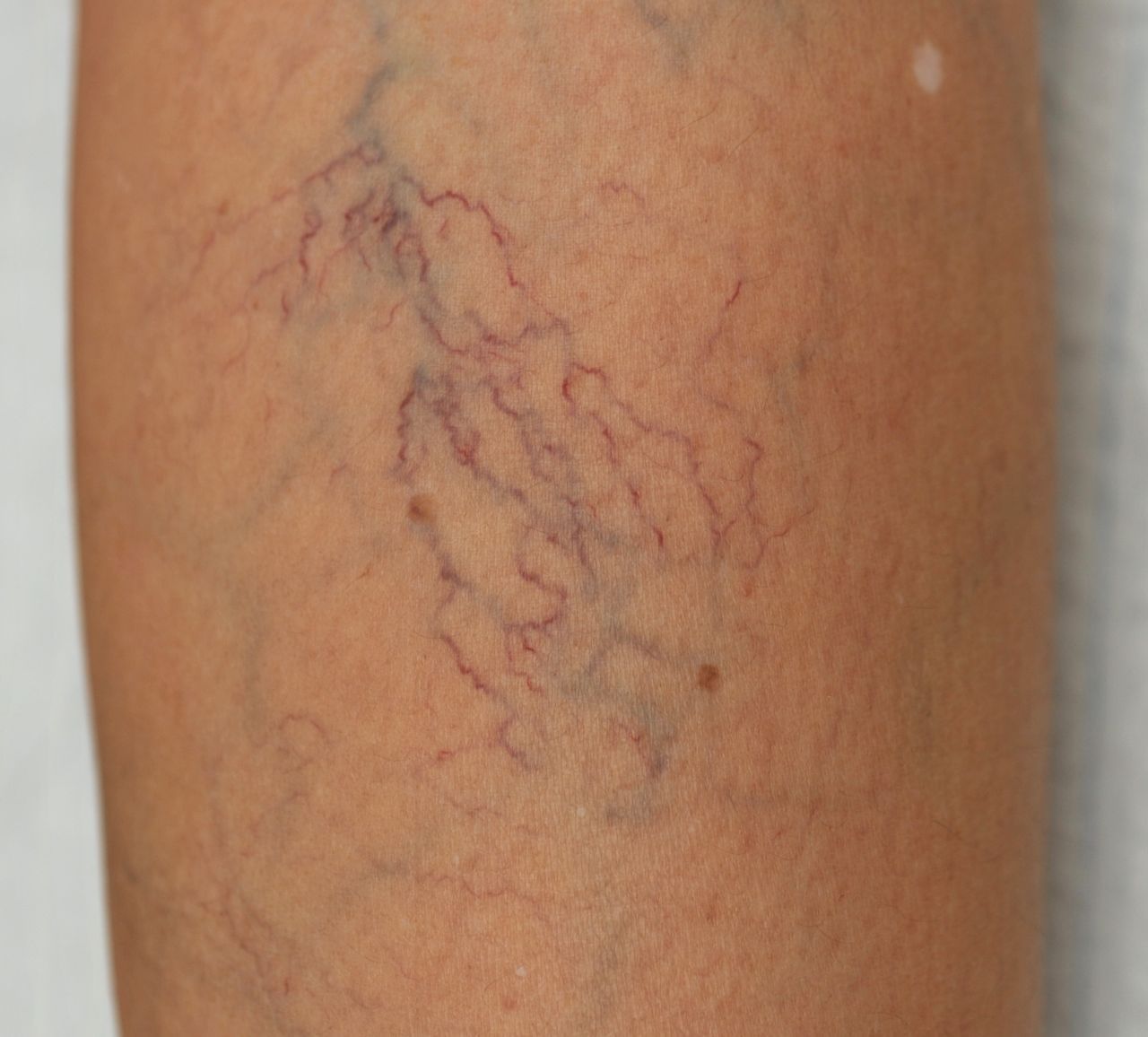 Observation is the initial method of diagnosing thread veins.

Often, thread veins appear as purple, red, or blue clusters of veins on the skin’s surface. They may appear as a single thread-like vein, or a clump of thread veins which may form a fan-like’ pattern. There are extreme cases whereby the thread veins are so numerous that the leg appears blue in large sections.

On other occasions, one may think it is a bruise that refuses to heal. However, on closer inspection or on getting professional advice, one realises they are actually thread veins.

On identifying these veins, you need to undergo a handheld Doppler examination at the very least. A venous duplex ultrasound is even better for scanning for underlying veins that may be the cause for your thread veins. Failing to diagnose and treat underlying vein problems may affect the quality of your treatment.

Conditions Likely to be Confused With Leg Thread Veins

Leg thread veins may be confused with conditions such as:

Haemosiderin deposition or venous eczema cause a discolouration around the inner side of your ankle which may look like thread veins. However, this is skin damage that is likely caused by hidden varicose veins.

The immediate thing in thread veins treatment is curing its underlying cause.

There are few instances whereby thread veins can be treated without the identification and treatment of underlying varicose veins; usually when the thread veins are hereditary.

If varicose veins are identified, they are first to be treated, and the treatment options include:

However, it is now advised not to undergo vein stripping as this treatment shows a high rate of varicose veins reoccurring thus causing thread veins to pop up again.

Once we have successfully treated varicose veins – or found there were none – we can embark on thread veins treatment.

This is the gold standard in thread vein treatment. It involves injecting a ‘sclerosant’ liquid into the vein. This liquid kills the veins’ walls. The dead wall is then eliminated from your body through a procedure referred to as ‘inflammation.’ Microsclerotherapy treats not only the injected vein but also all other veins connected to its venous system. Therefore, Microsclerotherapy is the best treatment available for thread veins.

This treatment, however, has some risks which may include:

• The sclerotherapy liquid that kills thread veins can also kill the skin if injected into the skin instead of the vein. This may cause the skin to disintegrate.

• If the sclerotherapy solution is not well prepared, it may cause excessive inflammation of the veins which results in the skin getting stained.

As such, only a qualified vein specialist should treat your thread veins. After the sclerotherapy liquid has been introduced into your veins, you should compress that area for two weeks to avoid blood flowing back to that vein. If blood flows to the treated vein area, it will clot there as there is no vein wall. Blood clots will at first appear green before permanently staining that area brown.

Therefore, after a Microsclerotherapy treatment, you will need to wear graduated pressure stockings for up to two weeks after the treatment.

Additionally, the treated thread veins are removed via inflammation, and it may take up to three months to notice improvements and a year before the skin clears up permanently.

Regardless of these concerns, when an expert performs Microsclerotherapy, and the patient follows directions such as wearing stockings religiously as per instructions, Microsclerotherapy unveils excellent results that are seen in blemish free legs and a high level of patient satisfaction.

Other methods of threads vein treatment include: